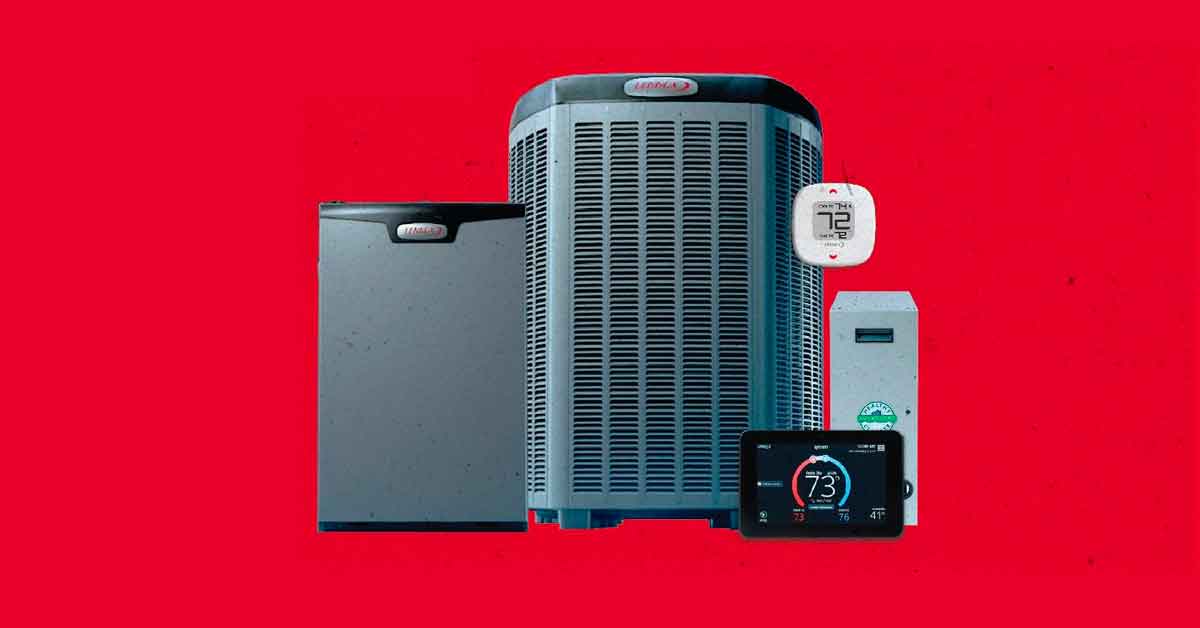 Split-System Central Air Conditioners are the most commonly purchased and installed cooling system in Florida and a mainstay of the broader HVAC arena.   The heating and cooling process typically seen in this configuration encompasses temperature control, cooling, and air circulation – an ambitious heat exchange orchestration made possible by the clever distribution of indoor and outdoor parts, components and assemblies.    This layout allows homeowners to pursue high degrees of indoor comfort and air quality, especially when homeowners elect to purchase a unit with a high SEER rating, at least 14 or above.

The end goal of split air system is to reduce humidity by at least 55%, cool the internal living space and ultimately expel the warm air into the atmosphere.  The diagram below gives homeowners a high-level illustration of the key indoor and outdoor components that work together in a split-system central AC configuration. 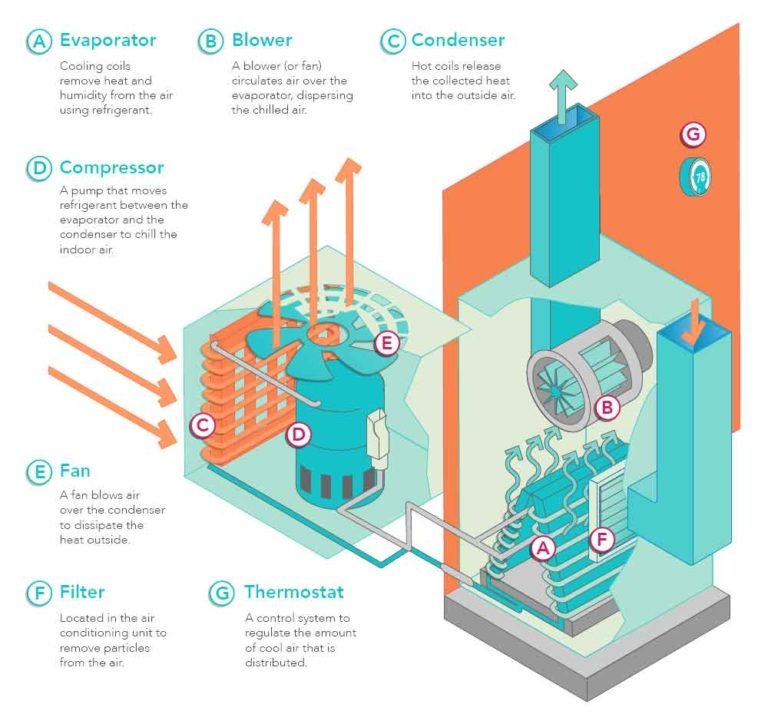 The indoor assembly is located inside the home and includes an evaporator coil mounted on top of the air handler (or furnace).   Internally, a blower fan motor sucks air through the return vent situated beneath it, blowing air over the evaporator coil. This forces air through the ventilation system that runs through the entire house.   The air is then drawn back through the return and flow cycle continues.    This results in a comfortable cooling effect on the internal living areas which is the hallmark of a modern split-system central air conditioner.

Once the desired temperature has been reached, the thermostat, usually mounted on a wall away from direct sunlight, sends out a signal to the circulation blower fan and condensing unit to turn off until the room temperature increases.

The regulation of the internal temperatures is governed (and controlled) by the thermostat mounted at eye level. It monitors changes in temperature and when necessary closes the cooling circuit, thereby allowing voltage to reach the circuit control board. In a timed interval sequence, it sends 120 volts of alternating current (AC) to the circulation blower fan motor in the air handler situated inside the home, and 24 volts to the outside condensing unit contacter.

As the contacter reaches maximum energization, it opens up a 240-voltage current to the outside disconnect box which is in turn connected to the condensing unit containing the compressor pump and condenser fan motor.

The disconnect box is key interface between the indoor and outdoor components, housing a cartridge (and fuses) which affect power in the condensing unit, situated roughly 12 inches away from the outside wall.     If the compressor or fan motor are not operational, it may simply require a new fuse replacement in the disconnect box to rectify the issue and re-establish an electrical current.

The compressor behaves like a pump inside the condensing unit, compressing refrigerant and gas into the condenser coils.  As liquid travels through the coils, heat dissipates with help from the condenser fan motor.

Side Note:  _The process intuitively suggests that it behooves homeowners to keep the condenser clean and free of debris.  If leaves or dirt clog the coils the heat will not dissipate properly, and the system will no longer operate efficiently or effectively.   One way to do this is to use a common garden hose to clean the condenser by spraying the coils from the inside out with water. The refrigerant’s (otherwise known as Freon) next destination is the evaporator coils back inside the home. The liquid flows into the coils expanding rapidly into a gaseous state which makes the coils cold and cool.  The gas flows through the coils to a suction line attached to the compressor.

The compressor converts gas back into liquid and the cooling cycle continues.The humidity in the air condenses on the cold evaporator coils and drips down into a set of collection trays. The trays are attached to either the condensate pump or the floor drain. This describes the general cooling process for split air system offered by HVAC companies like Air Pros. It continues to be refined and modified over the years, but in essence the process has remained the same for several decades.

The type of split-system AC you install will be influenced by your home layout including the degree of insulation. If your windows, roof and walls are well insulated and sealed, it may require a smaller size unit. The quality of your internal duct work will also play a role in this calculation. The size of your home will also affect the final size or tonnage of the central AC, which in turn affects pricing.