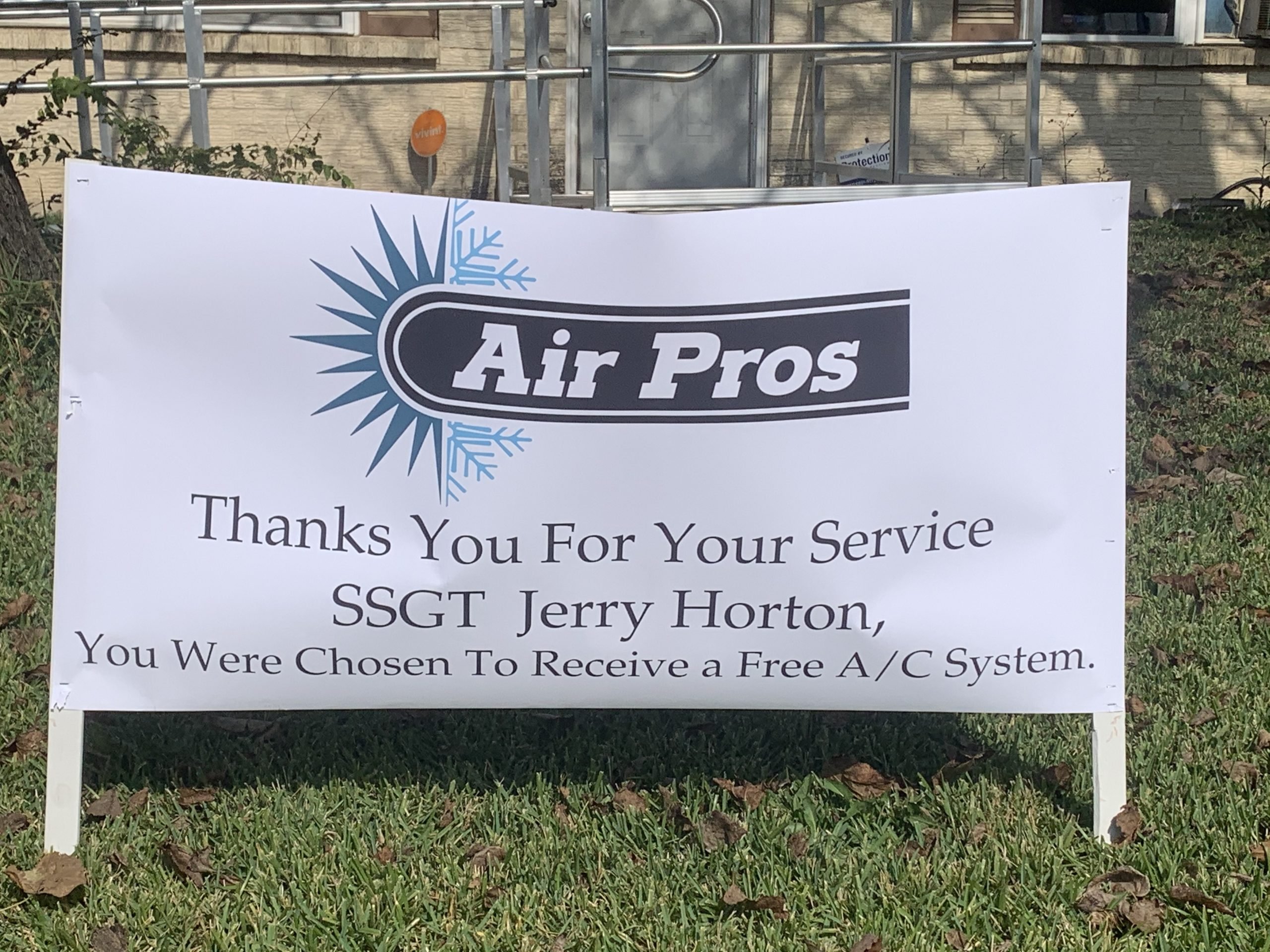 “I would like to thank Air Pros USA for organizing this wonderful contest and for giving me a free air-conditioning unit. I am thankful to my sister for nominating me and my family and friends for voting for me. It means a lot to me,” said Jerry Horton.

Jerry served in the United States Army for almost 11 years, based at Fort Sill, Oklahoma, and Fort Hood, Texas, with assignments in Germany and South Korea. He enjoys talking about his service, including an incident in 1979, when his military base went into lockdown for weeks after the South Korean President was assassinated.

Air Pros USA sponsored the contest in the Dallas Metro area to honor the men and women in our community who have served and sacrificed for our country by sharing their stories. Jerry was nominated by his sister and became a finalist in a public vote to win a new air conditioning unit. After three weeks of public voting, Jerry received the most votes and was declared a winner.

“The only form of cooling he has is a window unit that barely cools the room where he spends all of his time,” said Connie Adamson, Jerry’s sister, in her nomination of Jerry for the contest.

“We are so honored to make life a little easier for a local military hero like Jerry by providing a brand-new air conditioning unit and installation this Veterans Day,” said Anthony Perera, founder of Air Pros USA. “We truly loved learning about our local veterans through this competition. This is just a small way for us to express our gratitude for their service to our country.”

Jerry completed his service as an E-6 rank Staff Sergeant and went to school to get his degree in criminal justice. He proudly worked for the North Texas Tollway Authority for 29-years until his retirement. Today, he suffers from severe disabilities from neck and hip injuries which causes paralysis from the waist down and leaves him confined to his bed. He is dependent on his daughter and stepdaughter who come in daily to take care of him.

The other finalists of the Veterans Day A/C Giveaway, Anthony F. Marascola from Rockwall and Kayellen Butler from Burleson, will not walk away empty-handed. Each will receive a free A/C Tune-Up for one unit, valued at $99. Anthony served as a Marine in the Vietnam War from 1966 to 1968 and completed his service in 1969 as an E-5 Sergeant. Kayellen served in the U.S. Navy for four years in Orlando, North Carolina, and Tennessee and later discharged as a Petty Officer 3rd Class.

Air Pros USA was founded in South Florida in 2017 on the premise of integrity, reliability, and putting our customers first. The company has quickly expanded to many metro areas within Florida, Colorado, Georgia, Texas, and Washington, with more franchise partners expected to be introduced soon. Air Pros USA currently employs over 250 experienced professionals with 12 service locations. For more information, visit www.airprosusa.com.